These comics are comics I make to document the exploits of our old RPG group for the game “Brygs and Cylons”.  It’s… ridiculous.  Anyways, I forgot I made these, had a good laugh, and decided to put them up here.  I’m not sure if they will be funny to people who aren’t physically at the game, but at the very least, it will give you a clue as to how… silly? the games get. 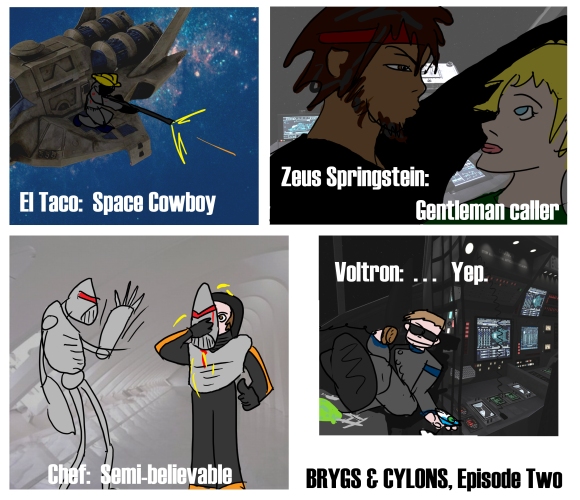 So, I thought I’d make a break from the typical “child hood” comics, and give you THE FIRST, LOST-IN-THE-INTERNET, FIRST EVER CHARLIE AND THE GHOST STRIPS.  For some reason, they never made it onto the website.  Where did I post them originally…?  maybe i didn’t.  anyways, here they are, and they are terrible, but at least you can appreciate with me how far they’ve come?  OK!  I mean, once in a while, I have a comic that is just kinda odd… but ALL of these are just kinda odd.  I don’t think I realized that it’s a good idea to write these out ahead of time or something.  ANYWAYS.  Also, notice Harrison!  Apparently a character I was going to develop.  Ah well. 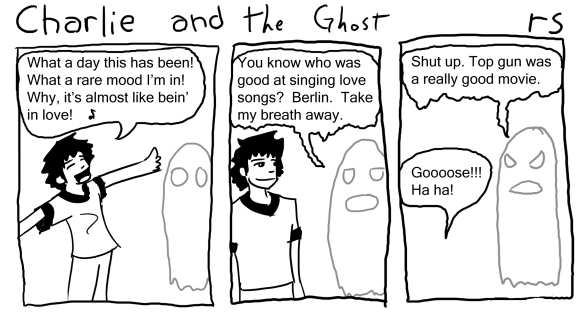 Astro is a product of me wanting to be an austronaught from like grade 3 to grade 7.  I only ever drew one comic with him, but I probably drew it 30 times… on the back of tests, on the back of note books…. it went something like this:  Astro’s space ship (which was a carrot) was breaking up upon re-entry (because it was a carrot) and astro would take out a thing of 9billion spf sunscreen and quickly put it on, and then the last frame would show a ball of fire re-entering the earth.  Funny?  not really, but i mean, I don’t know if the goal of Astro was to be funny…. (hence today’s modern astro retelling!)  Either then that, i would just draw random pictures of astro doing random things.  I wanted to include him in this glorious week of blast-from-the-past comics because astro was the first character I ever thought up that I could draw from different perspectives.  Not bad for a kid in grade 3.
His russian counterpart was cosmo.  He was exactly the same, except his helmet was gold.